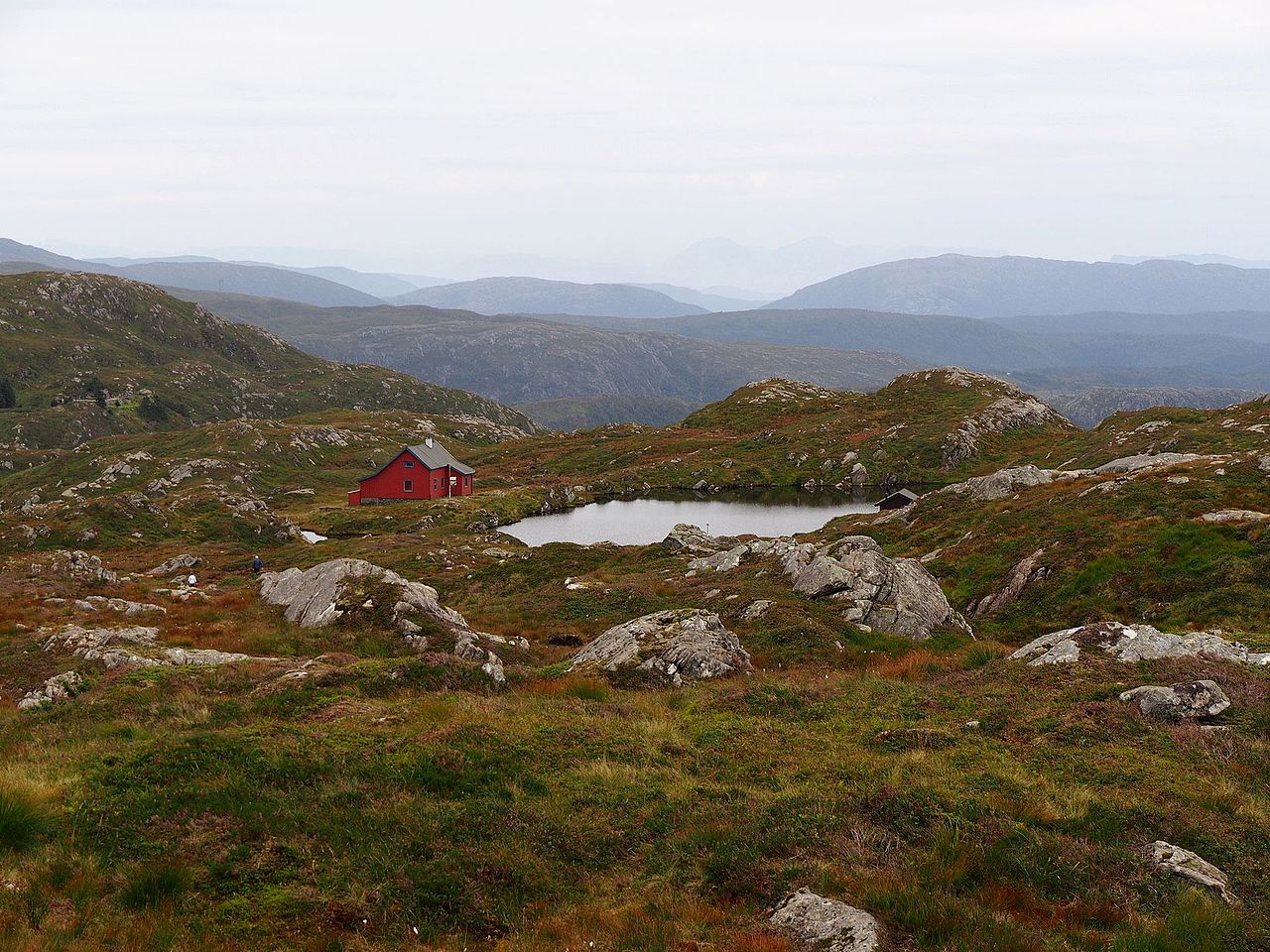 As unprepared as ever, my plans for Bergen were pretty loose when I got there. I was staying at the unremarkable (sorry!) YHA Bergen, which was however located in a pretty sweet spot right next to the Fisketorget (Fish Market). I’d had a peruse through some of the makeshift guides in the hostel and saw a hike – mysteriously named Vidden – which was described as ‘moderate’, so thought I’d gear up and give it a crack, as a nice little warm up before Trolltunga at the weekend.

There were a couple of easier options than the 15km, 5-6 hour Mt Ulriken to Mt Floyen that I’d gone for. But I had nothing better to do, so thought it was the ideal way to blow off any cobwebs; having not done any serious walking since Patagonia nearly 2 years ago (unless my 45-mins London walk to work counts?)

The hike isn’t too long, so I didn’t go overboard. The weather was relatively good, so I took my daypack out with some cold weather clothes and waterproofs as a backup. It goes without saying to make sure you have a decent pair of walking boots, too.

There’s nowhere to buy food on the route, so took an abundance of snacks (chocolate bars, crisps – all the healthy stuff), a 1 litre bottle of water, plus a small pasta pot which cost me about £5. Did I forget to mention Norway is quite expensive?

Getting from Bergen to Ulriken: 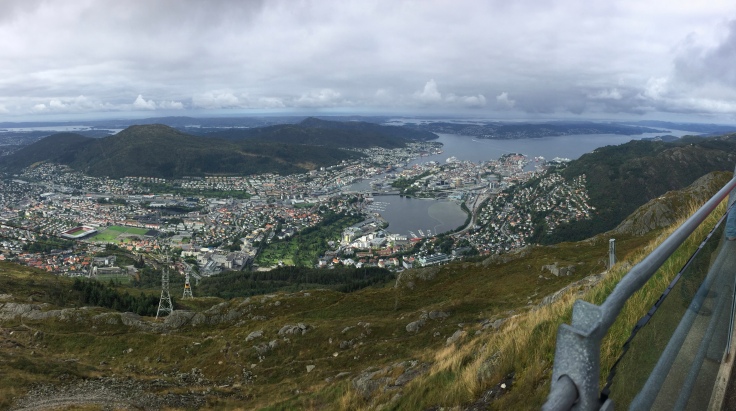 After two rounds of coffee and pastries from the local 7-11 (15 NOK, a relative bargain!), map in hand, I followed some vague directions towards the Lille Lungegårdsvannet Lake and hopped on the Number 12 Skyss bus to Montana, up towards Mt Ulriken. The 2nd bus I might add, as I’d been too busy feasting on cakes and missed the first one.

Once you get there you have two options; 1) begin the walk up to Ulriken from the bus, or 2) walk 10-mins to the Ulriken 643 Cable Car. I obviously took option 2, for some impressive views out over Bergen, and to tick another box off my short Bergen to-do list.

I must admit, this is probably the first solo hike I’d ever done – whilst Norway certainly brings it’s A-game in terms of how well things are set up, it was still a bit daunting. Before I started I collared a worker at the café atop of the cable car route for some reassurance. ‘Just follow the piles of rocks and poles’ was my advice, coupled with some finger pointing roughly towards the distance. Easy!

There are a number of different routes that start from Ulriken, so – obviously -make sure you follow the early signs for Vidden. Once I’d got going, I quickly got back into the swing of things, hopping between rocks like some sort of beginner mountain goat in their L-plates. The route takes you via a series of mini mountainside lakes and wooden cabins. For such a popular path, I only saw around 4 or 5 people in my immediate vicinity to begin with. This certainly kept me on my toes in terms of directions. There were also a few people who were actually running the trail, which gave me some confidence that it couldn’t be too difficult. 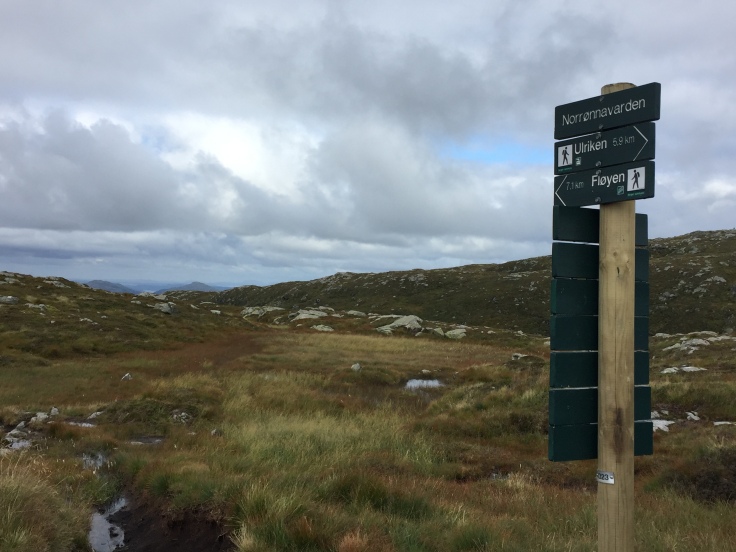 The panoramic views are magnificent; Fjords, mountainside, and beautiful lakes as far as the eye can see in all directions. The trek through the undulating terrain isn’t too difficult in fairness, aside from a few tricky steeper sections here and there. At around 5km I did nearky get lost however, and found myself heading towards a random cabin. Luckily I realised my mistake half way and got back on track without too much hassle.

With around 6km or so to go, I found the perfect lunch spot. A narrow section of elevated descending path which, straddled either side by two pristine tree-lined lakes. I dangled my feet over the edge and took 10 minutes to take in the scenery, and eat my expensive pasta.

Most of the final 5km is much more steady, as you stroll next to more beautiful lakes – and the odd Christmas tree field. As you get to around 3km to go, you begin to approach civilisation again and can spot Bergen port in the distance. The scenery becomes slightly more industrial, and touristy – until you finally reach Floyen.

By that point, I was roundly knackered. Rather than walk the final few km back into town, I opted for the Fløibanen funicular (approx. 45 NOK for a 10 mins journey) to take me back down into the real world instead. A worthy investment given that my legs had all but stopped working.

All in all, Vidden proved a worthy adversary after a hiking hiatus of a few years. A good workout with some impressive views, but not too testing. I would go as far as to say that this was the perfect introduction to trekking in Norway. Next up – the epic Trolltunga.

One thought on “Hiking Bergen: Mt Ulriken to Mt Flöyen”