Remember that time David Blaine sat in a glass box for ages for no apparent reason? I’m still not really sure what the point of it all was; I think you could watch him go to the toilet and all sorts. In the 21st century when flights are more frequent than cat videos on the internet, it seems just as pointless to go and sit on a bus for more than an entire day. Unless that is, you are a penny pinching backpacker who thinks it’s acceptable to eat pasta and sauce for dinner each night for 6 months. There are a lot of things you could do in 24 hours. Like, I don’t know, go on a bender at Glastonbury, or a little day trip to the seaside, maybe even a Breaking Bad marathon. The point is that 24 hours is a long time, add another 2 hours to that and you’ve got the amount of time it takes to get just halfway across Argentina on a bus. You’re probably aware that South America is a pretty big place already, if you weren’t aware then maybe should’ve paid more attention in Geography.

Long distance buses are an experience if nothing else, as a well-known ancient scholar once said about chocolates, “you never know what you’re going to get”. We decided to jump on a ‘Cama Ejectivo Bus’  (Cama meaning bed, Ejectivo meaning Executive – I think) run by a company called Taqsa to get us from El Calafate in Southern Patagonia right through to Esquel, in the North of Patagonia – roughly a 900km trip – for the sake of holding on to a few more of our sacred Blue Dollar rate pesos. It was easily the longest overland trip I’ve ever made, so I thought I’d write a few words about it to kill the engulfing boredom.

The bus turns up promptly, meaning me and my friend Rich are legging it back from the supermarket with a bag full of supplies from the supermarket late because of some bloke needing to exchange a bottle of Coke for a bottle of Fanta. Our plunder? 2 x bags of crisps (or chips, if you don’t speak proper English), 2 x large bottles of water, 4 x bon a bon chocolates (if you don’t know, now you know), 2 x Instant Lunch pot noodles. 2 x cartons of glorious £1 Termidor red wine (lovingly referred to as Terminator). Prepping for a 26 hour bus journey is kind of like getting ready for the end of the world; making sure you have outfits for each possible temperature, a solid selection of food supplies to compliment the sometimes questionable meals on-board, plus alcohol and valium.

There is a driver and a drivers helper, kind of like an air steward but instead of glamorous and full of life, more reaching towards his twilight years and with that “god I hope I can retire soon” look in his eye. He makes coffee for a select few people on the upper deck, then says something in Spanish to the rest of us which I think means we can make it ourselves. The bus itself is ace, modern, with wide 140 degree reclining padded seats and a pretty decent set of TVs. We are utterly spoilt with an absolute blockbuster of a movie starring and produced by Kevin Costner called ‘Black or White’, how he missed an Oscar for this one I’ll never know. Starting to get comfy and properly settled in now, oh the joys. Mid way through our next film, ‘The Heat’, which was also being shown in English with Spanish subtitles, the bus is brought to an abrupt stop and it appears we have arrived in everyone’s favourite stopover, Rio Gallegos. The problem with this is two fold: 1) Rio Gallegos is in completely the opposite direction to where we need to go, and 2) we are all told we have to get off our shiny new Cama (bed) bus and change on to a shitty old version of it which will arrive in 20 minutes time.

Things have gone somewhat downhill for leg 2. I mean not dramatically, but still. Our new bus is a fair bit older than the previous one, the seats narrower and less comfortable than before. Also the choice of movies has seemed to nosedive a little, coupled with the fact that we now have to attempt to decipher all movies from Spanish. We’re treated to a Mexican film about a bloke who shags lots of tourists then is given a baby by one of them. The giant-like new bus steward doesn’t seem to care too much about switching English subtitles on for us, which is fine. The view isn’t much cop either, most of the drive is up the tundra straddled, biblically long Ruta 40, which runs right through the centre of Patagonia and apart from a few stretches isn’t particularly known for its beauty. 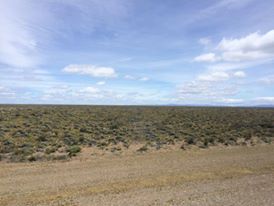 We decide to crack open the delicious £1 wine we’d bought with us, and actually socialise with each other. A German girl besides me is nice enough; we talk about how much she loves climbing and how much I don’t. I think she is mainly just confused as to why we’ve bought quite so much wine for a bus journey. We’ve already eaten most of our snack supplies through boredom, minus the instant lunch noodles which I’m saving for later. But then… DINNER. Not quite the fillet steak I was expecting but instead an edible concoction of rice and chicken, plus the mandatory bread and tooth rottingly sweet cakes. It’s dark now, we’re rattling through Spanish language films at a rate of knots and I’m starting to feel a bit pissed after one too many vinos.

Rich has nipped to the toilet again, deciding to brave the surprisingly clean cupboard-sized water cabinet in just his socks. Not naked that is, but solely without his shoes. I’m hoping at this point he’ll whip out his weapons grade supply of Cambodian valium from his last trip some time pretty soon. I’m pretty shit at sleeping on buses, so anything to help me on my way is a bonus. I’m not disappointed, and we’re soon on a one-way trip to sleepsville. Everything starts getting a bit fuzzy and I feel like I’ve been paralyzed from the shoulders down.

Before I knew it I was out for the count, aside from a few awkward twists and turns brought on by some jerky bus driving and random middle of the night stops across Patagonia to collect newcomers. We’re woken up with another sweet s

nack, just what you want first thing in the morning. One is a pretty non descript cake, the other a small biscuit type thing which is covered entirely in a thick layer of sickeningly sugary white icing sugar and has everyone’s favourite Argentinian milk based caramel in the middle, Dulce de Leche. Yum. The sachet coffee that is served shortly after however, is a welcome relief. The entire bus has now taken on an oven like quality from the morning sun, which has burnt everyone awake from their slumber. More South American films follow on the screen above our heads (every time I look up I’m greeted by images of graphic butchery, a film about an Argentinan butcher who after getting pissed off with his boss, decides to butcher him too) I attempt to do some reading in between increasingly sweaty naps.

The coffee has started to work it’s magic as caffeine often does, meaning things biologically speaking are starting to shift a little. However therein lies a problem, for some unknown reason the toilets are littered with posters and signs which for some unknown reason emphatically remind you that a) you must not sit on the toilet seat (with diagrams), and b) there is to be no ‘solid waste’ put down there (also with diagrams, weirdly). Fantastic.

People are starting to melt into their allotted seats all over the place, clearly agitation levels are increasing and I think people just want to leave their bumpy prison as quickly as possible. Respite comes in the shape of a roadside services which is surprisingly well equipped. I’ve long since managed to convince myself that I don’t actually need to go to the toilet anymore, but the same can’t be said for many of my fellow passengers; the rush to the toilets is real. Dressed in an intriguing combination of rolled up hiking trousers, long johns, a red Christmas jumper like llama sweater and bobble hat, it’s pretty fair to say I look like a bizarre kind of sleep deprived homeless clown. I’m grabbed by a gang of local youths and jostled into a random selfie with them all, then jeered back onto the bus whilst they keep laughing and saying things about the ‘cool’ gringo in broken English.

The home stretch. Lunch is served, a gristly few lumps of chicken and some bread, with the obligatory cake thrown in for good measure. All I want now is a shower and some steak. I dive back into my Patagonia guidebook to try and kill a bit of time which seems to do the trick. We finally start seeing signs of approaching Esquel, just a mere 26 hours from when we set off. Within no time we’re in the Bus Station, and getting off the bus feels like being released from some sort of weird social experiment. Maybe next time I’ll just fly.